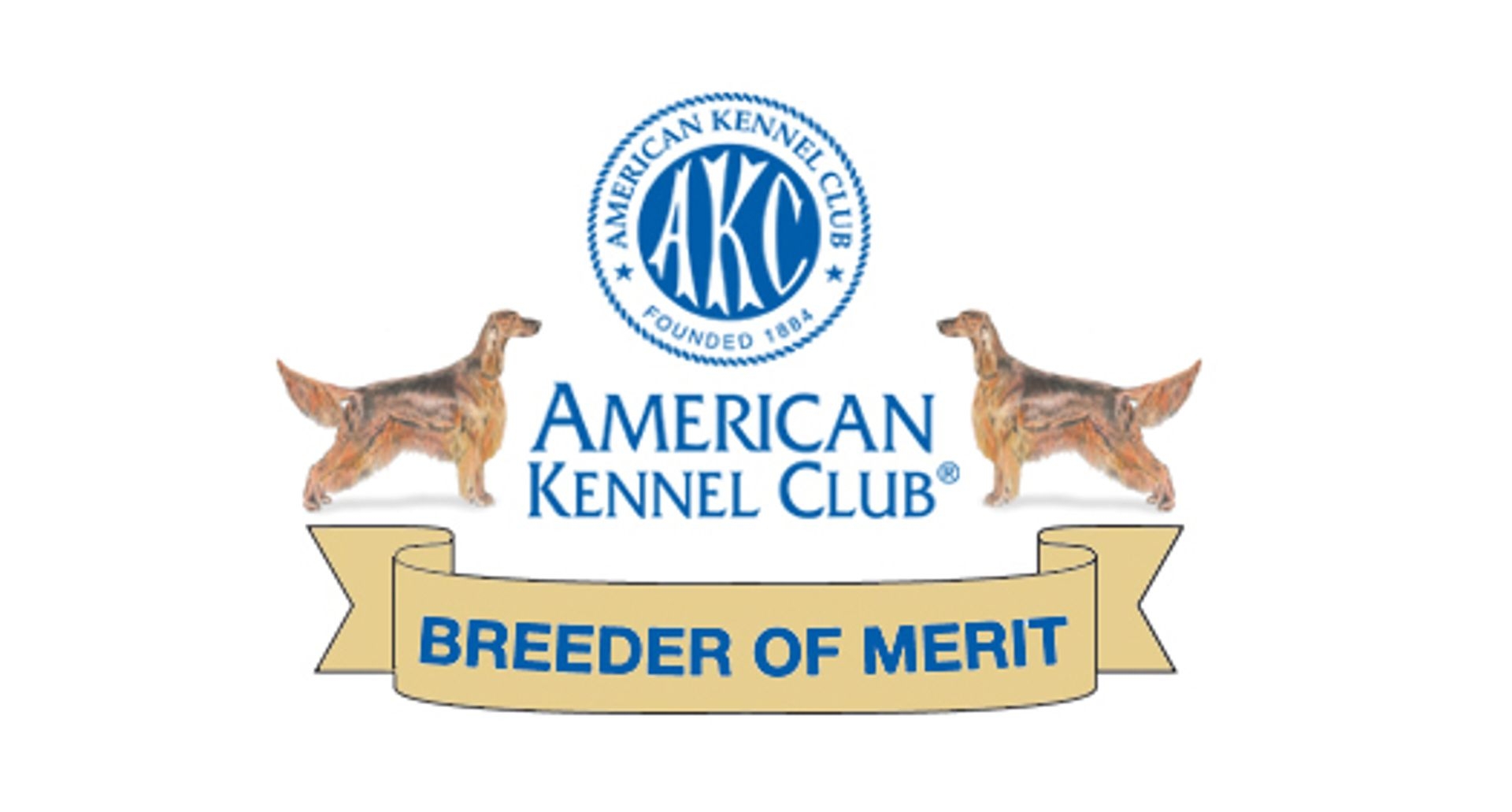 Lots of changes have been going on here, all fore the better.  Have a young group of dogs I am trialing Astro is in gundog and showing great promise. His little sister Pebbles was running the juvinial stakes doing a good job but started to pick up some habits that we did not want to continue so she was brought home to mature a bit more. Will work on braking her out this fall. Bea is also coming out of her vacation to be broke out.

It was Sunday 2/4. I woke up to the house shaking with 20+ MPH gusts....I had booked the day to hunt, Finn was over due. My impulse was to cancel, my resolve was to get Finn some time in the field he so rightly deserved. I figured if he had fun it would be worth the time. Driving to the preserve I recalled a training day some years ago with a Setter I had acquired from Fazenbaker. The wind that day foiled the GSH pointers, but the dog I was working with, Jake, had good presence, knew to use the wind, and pointed all the plants that day. The trainer cornered me and advised "don't get that dog fixed...."

So, we arrive at the field, and its cold and its blowing, I'm thinking my son will sit this one out in the truck, but offer that only as a fall back, and ask that we find some vale and try to duck the wind thinking the adrenaline will get going with the hunt. So off we go.

We weren't 15 minutes out and Finn starts getting birdy, the tail wag and posture are unmistakable. Remember, the conditions are tough, on top of the wind there is a layer of snow over a layer of ice, we are hunting over a mix of milo and Indian corn, the tufts of crop are covered with ice, but offer a burrow on the downwind side. So Finn locks in ( when there is a bird, you can't move him, you could try dragging, be remember he's close to 90#).

So we walk up and down the corn row looking and kicking at every shadow. No bird....I look to Owen ( my Boy) I said "O, if Finn says there's a bird in here there must be a bird in here, let's do it again." and sure enough the hen turn here head and I see the flash of her eyes! I kick, she goes, O shoots, O shoots again.....I shoot.... I shoot again, and see one feather fly....ugh Cripple. Finn goes. A couple minutes later she's in the game bag.

We hunted for maybe 4 hours that day, we put up maybe 8 or 9 birds, hit 4, bagged 4. None of them were clean kills I'm ashamed to admit, they would get up and then just get sucked off in the wind, we just couldn't seem to swing fast enough. But every bird we nicked Finn fetched up. The wind never threw Finn that day, he would just double back and readjust his read on the cone. There were a couple of points that after we walk through he readjusted on, but once he locked in we had to find the bird.

At one point we had flushed and missed a hen, we combed the area that she appeared to land in, and Finn pointed to an area, as I started to forge ahead I saw the wing of a hen, perhaps an owl kill, or who knows, I called him off, but he wouldn't budge....again, I look at O, said we better keep looking, sure enough maybe 10 feet ahead of the wing is a Cock sitting in a tree....

I could go on and on. I can say this much in summary; we didn't get cold that day, we were really jazzed up following the lead of our faithful leader, Runs Like A Sutphen. If it wasn't windy that day it would have a been a perfect showing by Finn anyway, that it was a horrific day wind wise and he was still perfect makes it my best day of hunting with no contest.

(Then I recieved a second email from Jason, As A breeder these are the story you want to hear over and over again. Thank You Jason.)

you've heard what a wonderful hunter Finn is, you also need to know what a faithful companion Finn is;

we live in an old farm house, the farm dates back to the mid 1700's, and while some of the land has been sold off over the years much of it is still farmed for produce.

Finn typically joins me for morning rounds including tending the chickens. This morning (3/2), in typical fashion, while I'm tending the layers Finn heads out the lower field, maybe 500 feet away, and investigates what the coyotes were up to mere hours earlier. * I remember being told that while you may not know where your bird dog is, your bird dog always knows where you are * On this morning before continuing out with Finn for a longer walk I leave him on his patrol, while I double back to the house for a coffee re-fill. Before heading back out, I look out the window, and where is Finn? Right where he always is when I'm inside and he's outside, holding his post in the middle of the driveway, nose to the fields, awaiting my return.

Finn is the best dog ever 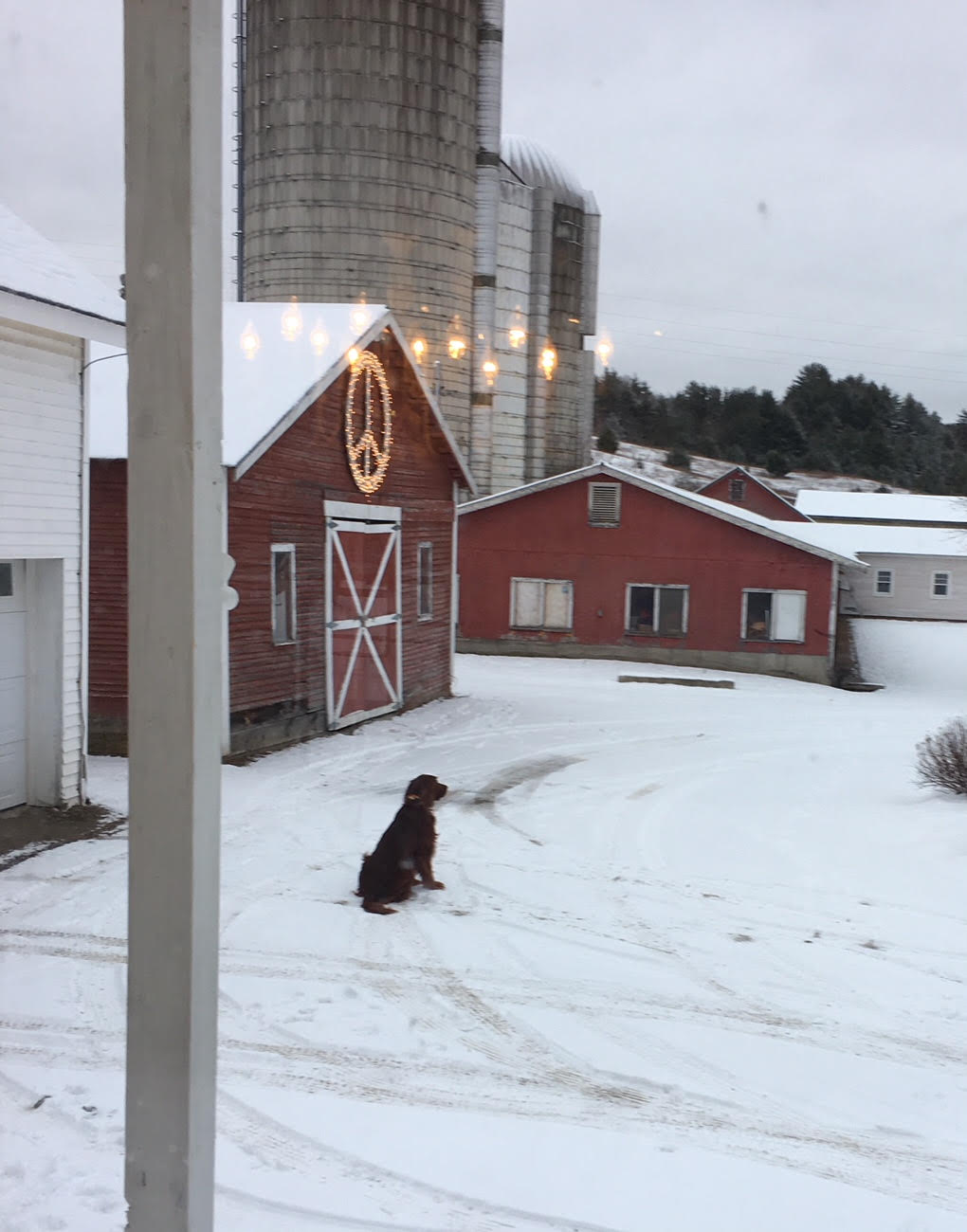 The field trial season is upon us. We are 2 trials in and Janet Gomez Boy Rory in on Fire. Rory has picked up majors towards his firld championship witch leave him needing 2 more point to be a Dual Champion. We are so excited for Janet and Rory and for Mythodtical Irish Setters. Rory will be the 3rd Dual Champion to come out of this litter. We made history when we got 2 now let go for 3. Way to got Jean Webb for training all 3 of these special dogs.

Today i brought Gandalf and Astro out to a hunt test Astro ran in juniors with Brent handling him for the first time. and I ran Gandalf in Master. The weather was hot but bird work was goodand both passed leaving Astro needing one more pass for his JH and Gandalf needing 4 more master passes to get his MH 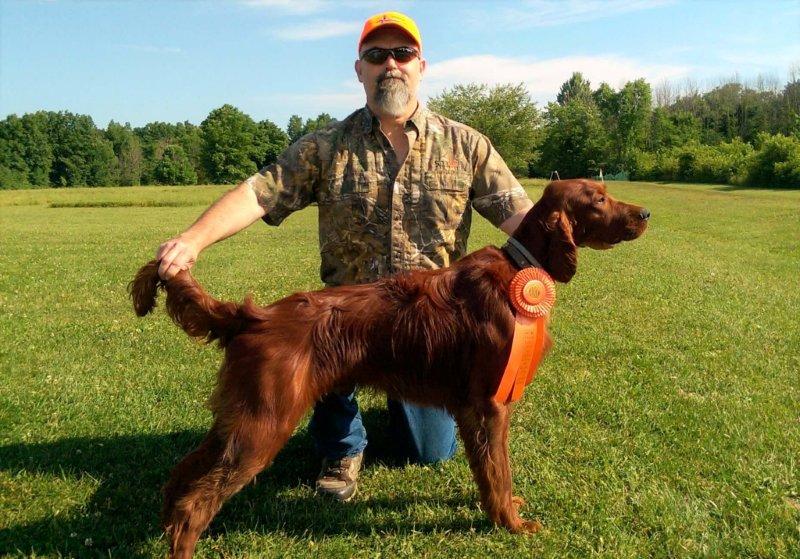 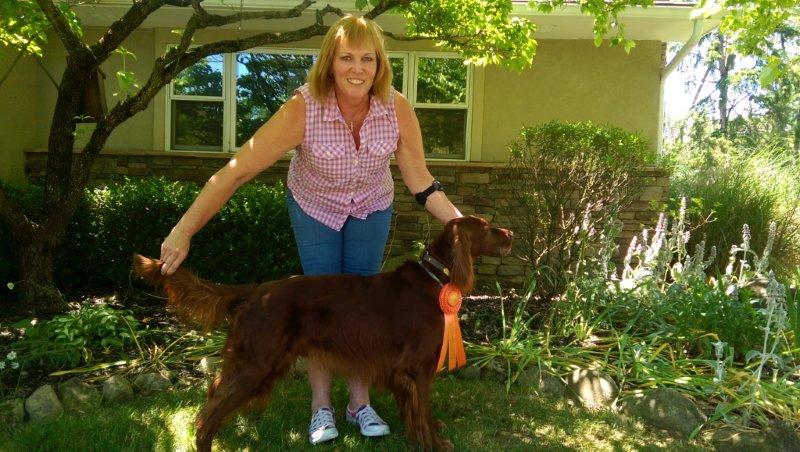 I am behind on my posts first Last Aug Gandalf and Meg had a litter of 14 pups. This past Febuary Ember was bred to Gunner and had 11 pups. All are in there new homes and doing great.

April 15-16-17 was the ISCA double Hunt tests on Friday walking field trial on Saturday and Walking Gundog Championship on Sunday.

So on Friday I ran Astro in both Junior hunters with 2 passes, Gandalf ran in 2 master hunter with one pass, we had no birds the first time around. And ran Artemis in one junior with a perfect score and a pass. 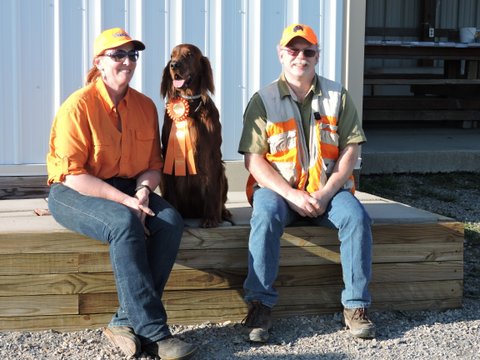 Saturday was a very busy day I ran 4 Amatuer dogs 2 derby dogs. The best was the Amatuer stake Orin won (Fiona's Brother ) to finish his Dual Championship making him the 25TH Dual in the history of the breed and the only litter to produce 2 dual champion, Very exciting for Mythodical Irish Setters,  there Trainer Jean Webb and Orin's Human Jim Pinkston. with Brother Rory going second for his first field trial points, very exciting for his trainer Jean webb and owner Janet Gomez. I can not espress how happy and greatful we are to both owners and trainer for believing in our dogs to be the beautiful bird dogs they where bred to be. 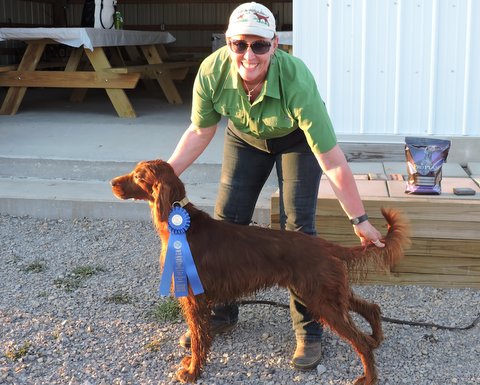 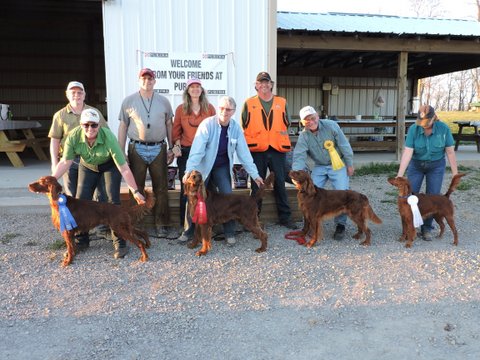 The Derby stake was just as much fun with Artemis doing a beautiful job finding and pointing birds and Astro not far behind her in his bird work but Artemis's maturity shined through with a win for her and Astro going 3rd. Thank You Jean Webb for training and conditioning my dogs. 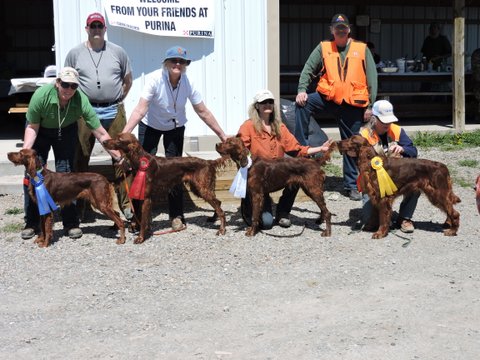 In the walking Championship I ran Fiona and Gandalf. Fiona had bird work early on but the decided she did not need to honor her brace mate which made it a short day for her.

Gandalf brought his A game and had 3 beautiful fine and stood through his bracemate pushing his bird up and stealing point to finish second in the walking Gundog Championship. 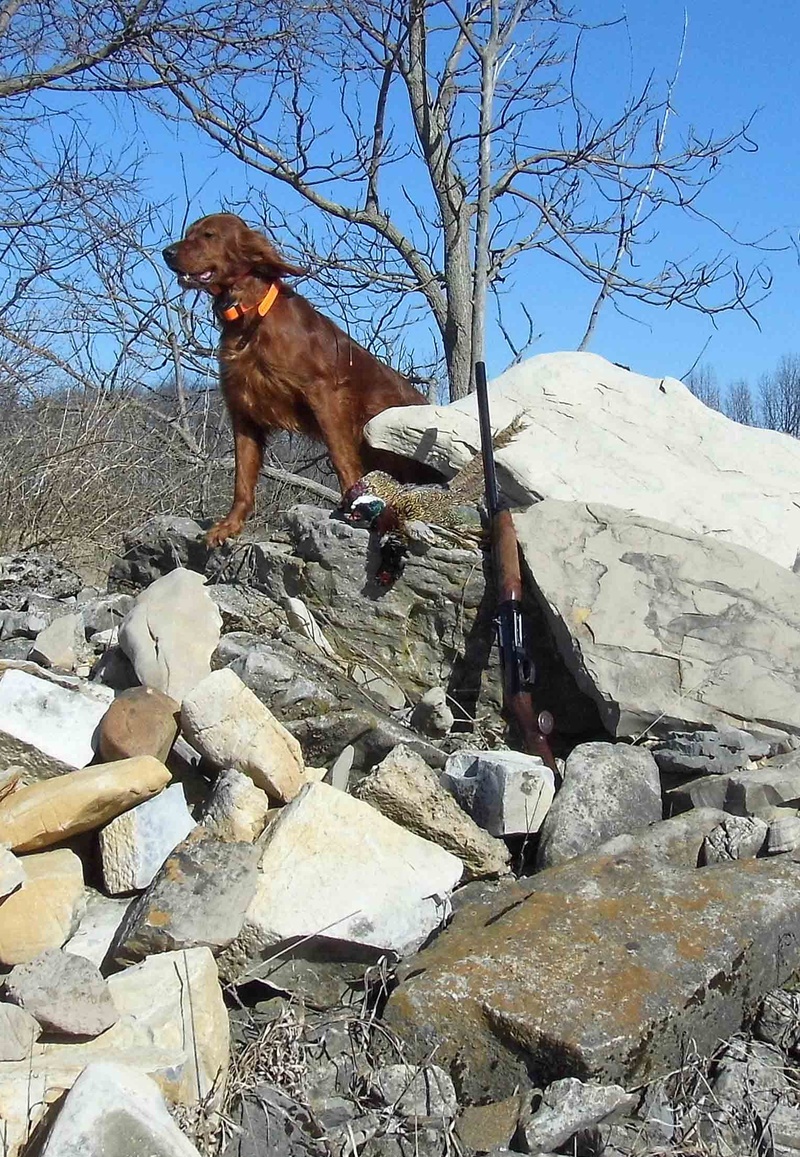 This boy is doing it all.

Ch. Mythodical Russell Hail Storm, FD ( Goose) with Kate after taking a break from the BCABPC field trial where he took a five point major win. 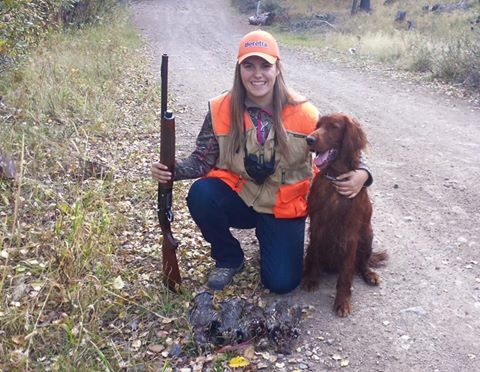 Big Congratulations to Jim Pinkston and Orin for fininshing your Show Championship this weekend. Big thanks to Team Eileen Hacket for making this dream come true. Now back to the field to finish his field championship for our next Dual Champion. 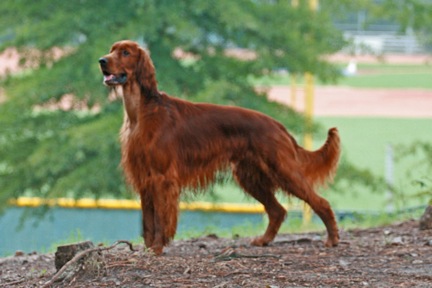 Artemis ran in the open Derby and won for 2 points. She did a great job with 4 beautiful finds and handled so easy.

Thank you Silvia Timmermann for the photo. 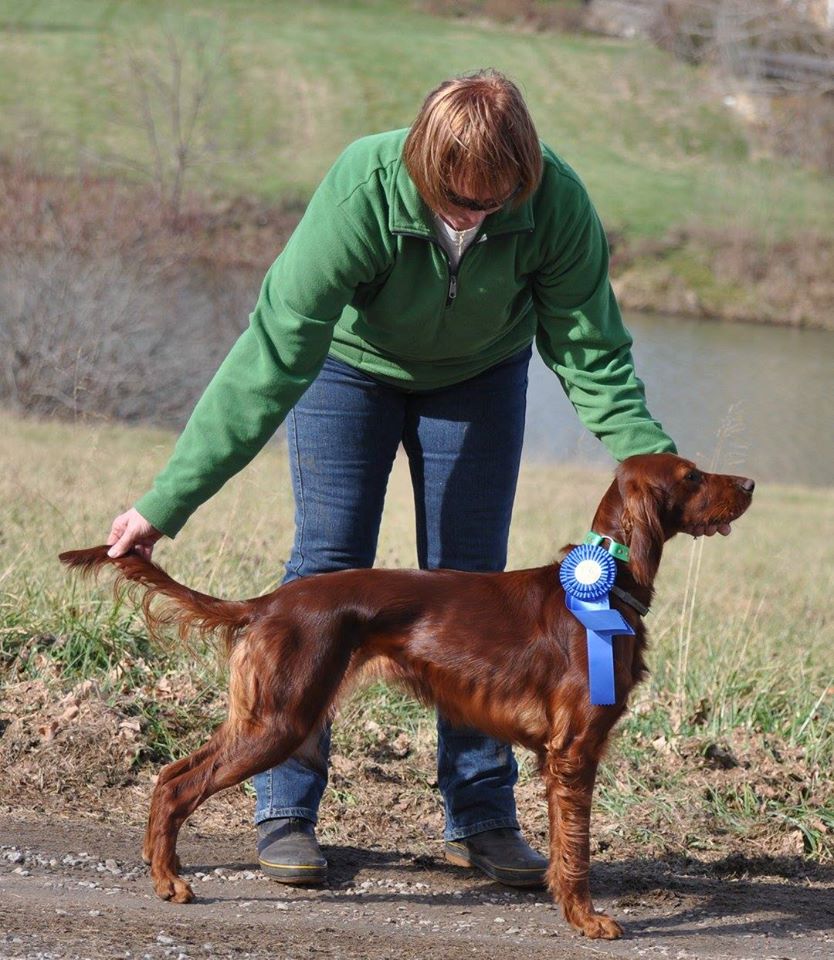 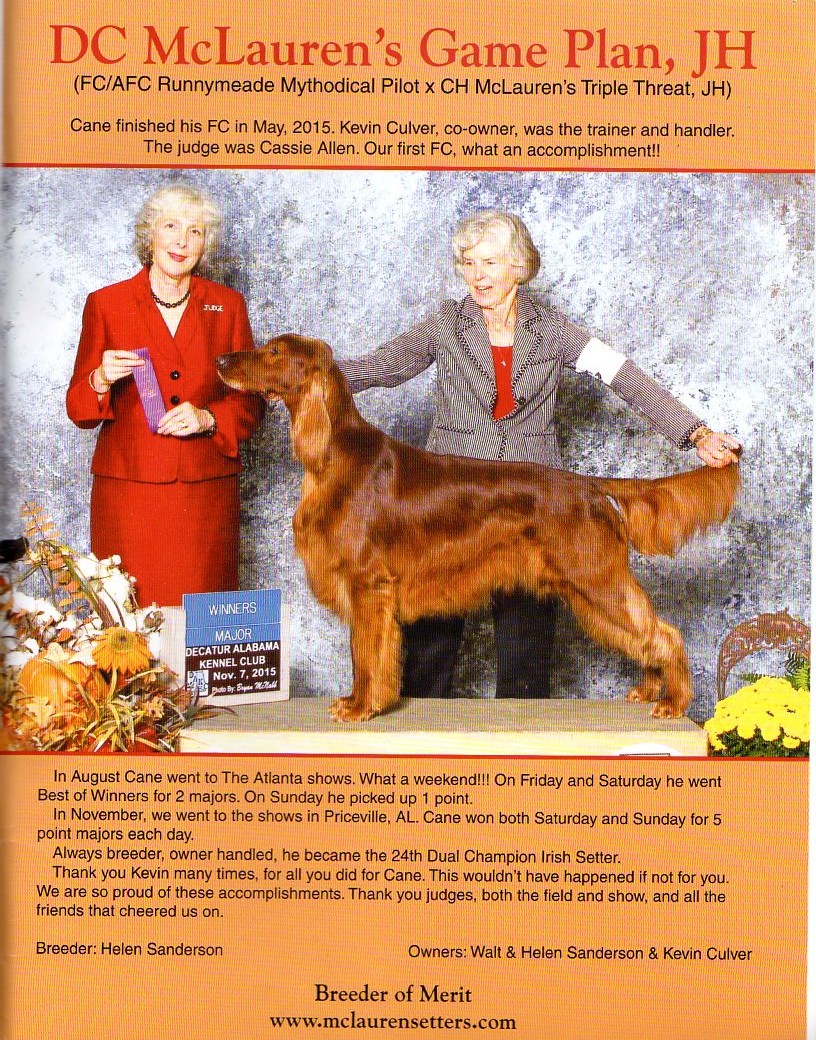